about The Retreads Crest

​The SHAPE of the Retread Crest was taken from a U.S. Navy award presented for that which is considered to be the best!

The CHIEF - is a field of GOLD with the name RETREADS in BLACK thereon. It denotes those Golden Years Over Forty. The name RETREADS is obvious; we have reached an age where a "retread" has become necessary!

The BAND SINISTER - is BLACK and BLUE and slants upward from left to right across the field. It signifies the Black and Blue marks that we have all acquired while learning to ride.

The UPPER SINISTER field is split, half being RED with a pair of Rampant Stallion Heads in place and half being BLACK. The RED half of the Upper Sinister field represents valor and the blood that we have shed.

The Rampant Stallions which appear so proud represent the strength and stamina of the Retreads. As a pair, they indicate that we work together as a team. The BLACK half of the Upper Sinister field is for the mourning of our club’s departed brothers and sisters.

The LOWER DEXTER field is WHITE with the Roman Numerals "XL" and the word "PLUS" beneath; both in RED. WHITE symbolizes our purity of mind and thoughts, and also the color of our face in that first tight curve!

The RED Roman Numerals "XL" and the word "PLUS" designate the age of Forty and Over, which one must be to become an official member of the Retreads....and as everyone knows, life really does begin at Forty.

A BLUE OVERBAR may also be placed above the field of GOLD, upon which the name of the State or Provincial Chapter in which the wearer resides is written in WHITE.

WE.....the RETREADS.....wear this CREST with PRIDE. It designates us as members of a select group that enjoys a wonderful sport, good times, many laughs and miles of open road.

The Retread "Crest" and symbol "XL Plus" and "XL+" are Registered Insignias and Trademarks in the United States of America and Canada. 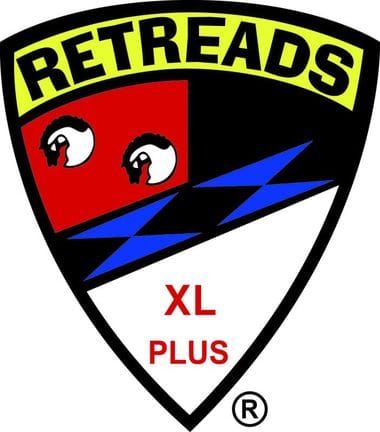